A Blankie for Christmas

I have not blogged in a month. This time of year, projects that I work on cannot be posted if I want them to remain a Christmas surprise. One of these was a baby blanket project from the last couple weeks - but not just any blanket. When he was a toddler, my son's favorite blanket was lost while we were on family travel. I decided at the last minute, with barely enough time before Christmas, to knit my now-adult son a replica of the original blanket and gift it to him for his daughter who is due to be born in late March. I would also write and include a related poem suitable for framing. Here is Dan as a toddler using his original blanket shortly before it was lost; it was round, knit in garter stitch in a pinwheel type design, with a white, yellow, and green variegated yarn. 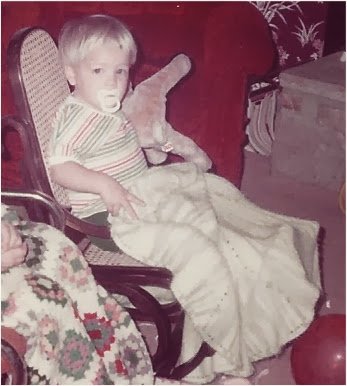 I finished the blanket in the nick of time, very late the night before my son and his wife arrived for the holidays. Here is a picture of the completed 2013 version reminiscent of the lost 1983 original. 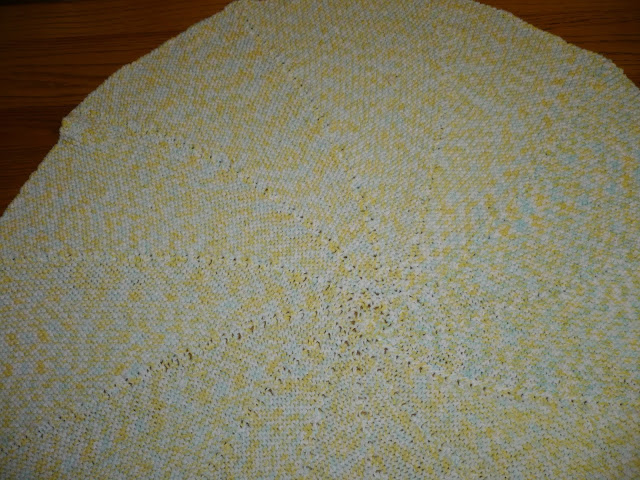 Finding the vintage yarn was not easy. Medical technology now allows most expectant couples to know the sex of their baby before it is born. Thirty-odd years ago, when I had my kids, this was not the case. An odd effect of this advance knowledge is that there are now very few variegated yarns on the market that are gender neutral in color. Finding a white, yellow, and green combination was challenging. I did find the combination but in a finer weight yarn than worsted weight I wanted. I compromised by using two strands of the finer weight yarn. An unexpected outcome of the two strand approach was that the color variations were more subtle in the final product since stitches took on a tweedy appearance from two colors per stitch instead of one color per stitch. I actually like the more subtle effect.  It seems a bit more suited for a girl, inexplicably sexist as that sounds.

My timetable for completion was tight and then I lost two days worth of knitting due to a mistake. The blanket is knit in radial rows, spiraling around like a pinwheel with twelve sectors. The first five wedges clockwise were done correctly. Then I did not complete the 6th wedge shaped sector before knitting the later rows of what I thought was the 7th sector and beginning the 8th sector. Here is a closeup of the mistake showing clockwise from vertical the completed 5th sector, the 6th sector missing its final rows, the 7th sector missing its early rows, and the beginning of the 8th sector.  I had to rip out the incomplete 7th and 8th sectors. There was no other way to recover. 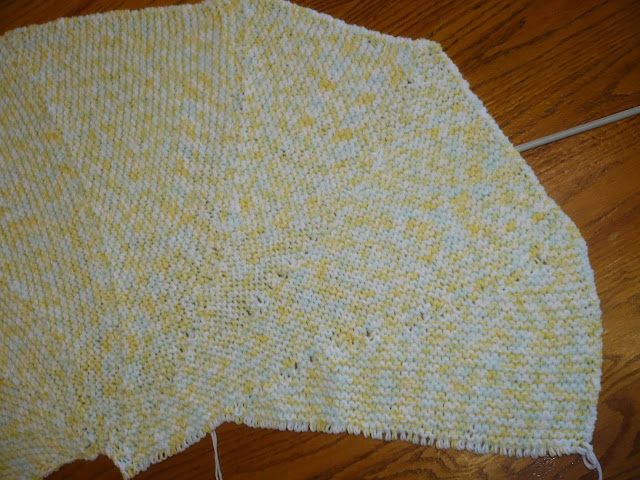 After composing the poem, I printed it in a format suitable for framing. I've repeated it near the end of this post in a larger font suitable for those whose eyesight no longer permits them to read tiny text. Here is the poem printout along with a picture of my son snuggled under his replica blanket. He is not sure if he will let his daughter have it! I am sure he will once she has wrapped him around her little finger. 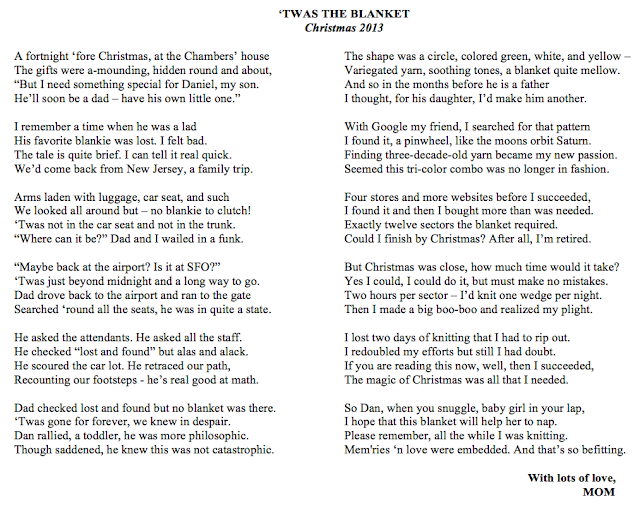 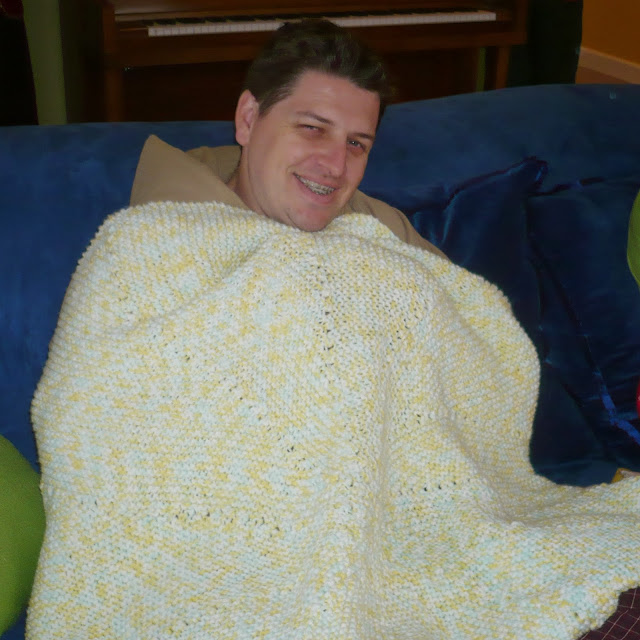 Here is a side by side comparison of the 2013 replica blanket with the ~1983 original. I guess Dan still sleeps in the same pose he did as a baby. 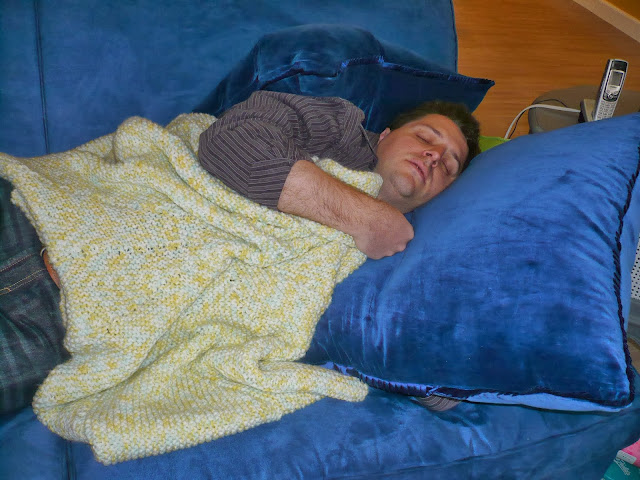 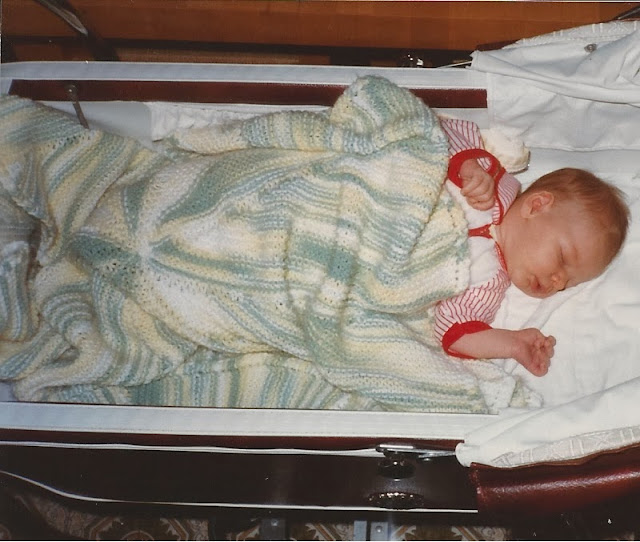 And here is the poem re-typed in a larger, easier-to-read font size.

A fortnight ‘fore Christmas, at the Chambers’ house
The gifts were a-mounding, hidden round and about,
“But I need something special for Daniel, my son.
He’ll soon be a dad – have his own little one.”

I remember a time when he was a lad
His favorite blankie was lost. I felt bad.
The tale is quite brief. I can tell it real quick.
We’d come back from New Jersey, a family trip.

Arms laden with luggage, car seat, and such
We looked all around but – no blankie to clutch!
‘Twas not in the car seat and not in the trunk.
“Where can it be?” Dad and I wailed in a funk.

“Maybe back at the airport? Is it at SFO?”
‘Twas just beyond midnight and a long way to go.
Dad drove back to the airport and ran to the gate
Searched ‘round all the seats, he was in quite a state.

He asked the attendants. He asked all the staff.
He checked “lost and found” but alas and alack.
He scoured the car lot. He retraced our path,
Recounting our footsteps - he’s real good at math.

Dad checked lost and found but no blanket was there.
‘Twas gone for forever, we knew in despair.
Dan rallied, a toddler, he was more philosophic.
Though saddened, he knew this was not catastrophic.

The shape was a circle, colored green, white, and yellow –
Variegated yarn, soothing tones, a blanket quite mellow.
And so in the months before he is a father
I thought, for his daughter, I’d make him another.

With Google my friend, I searched for that pattern
I found it, a pinwheel, like the moons orbit Saturn.
Finding three-decade-old yarn became my new passion.
Seemed this tri-color combo was no longer in fashion.

Four stores and more websites before I succeeded,
I found it and then I bought more than was needed.
Exactly twelve sectors the blanket required.
Could I finish by Christmas? After all, I’m retired.

But Christmas was close, how much time would it take?
Yes I could, I could do it, but must make no mistakes.
Two hours per sector – I’d knit one wedge per night.
Then I made a big boo-boo and realized my plight.

I lost two days of knitting that I had to rip out.
I redoubled my efforts but still I had doubt.
If you are reading this now, well, then I succeeded,
The magic of Christmas was all that I needed.

So Dan, when you snuggle, baby girl in your lap,
I hope that this blanket will help her to nap.
Please remember, all the while I was knitting.
Mem'ries ‘n love were embedded. And that’s so befitting.

With lots of love,
MOM

For those interested in making a round blanket like this, I found a website and adapted its pattern for a pinwheel mat. I used size 10 1/2 needles and two strands of light weight yarn, #3 in the standard yarn weight system. It took two 10.5 ounce big skeins and less than half of a third skein. Here is my adaptation of the pattern:
The source website for the pattern I modified was http://redcouchknitters.global2.vic.edu.au/2009/05/27/this-is-a-knitting-pattern/
Posted by DianeLoves2Quilt at 2:20 PM 2 comments: