My initial post on this piece, dated December 28, 2016,  left off at the stage where I was assembling wedges. The sections, then very close to final assembly, are all joined now. 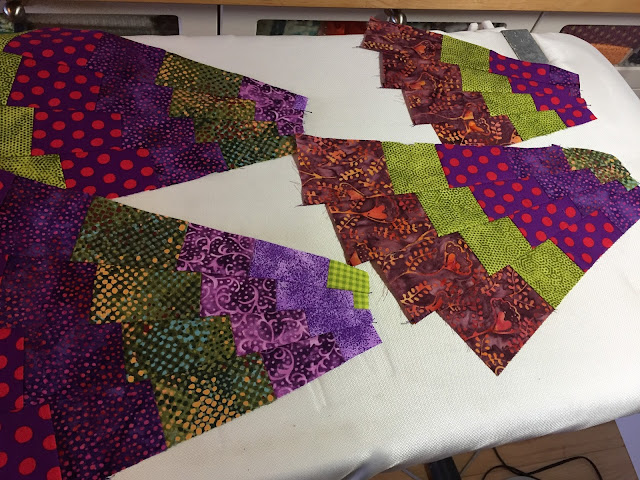 I removed the central widest section from the S-shaped double spiral and trimmed off the jagged outer edge. 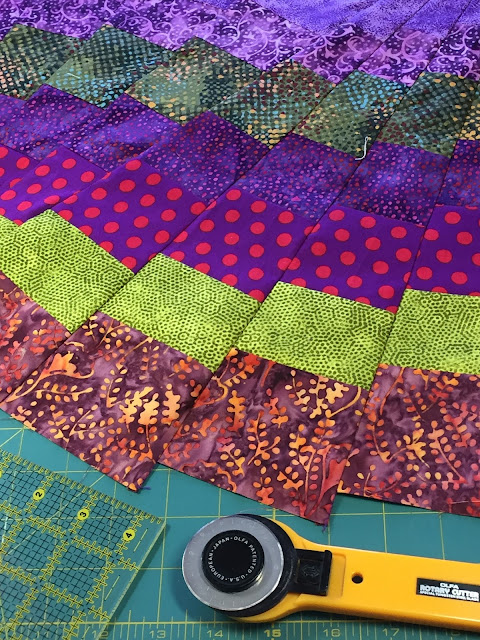 I added smooth contours to that center section to fill out the corners, at the lower left for ground and at the upper right for sky. 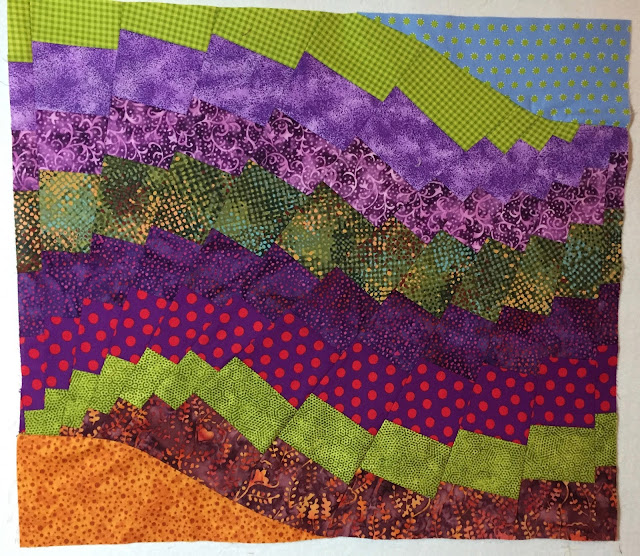 For the backing, I picked this bluish green as a bit of a surprise. This hue, though not dominant, is present in small doses in the brown/gold/green/blue pixellated fabric. Although I think this is meant to be chicken wire, the twisted portions made me think of grape vine tendrils entwined along a guide wire. 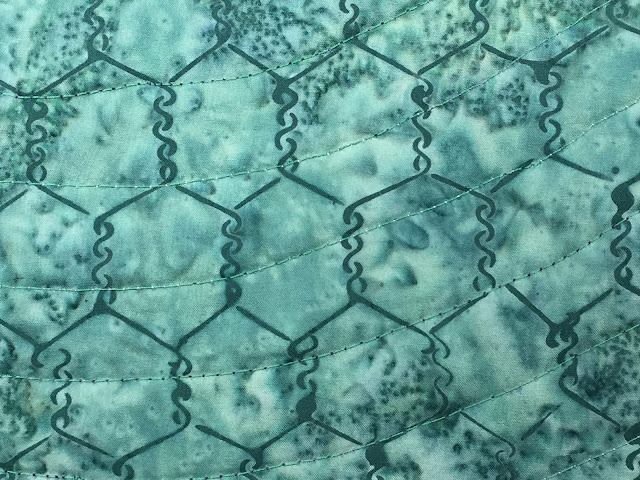 See the similarity in this photo of a typical grape vine? 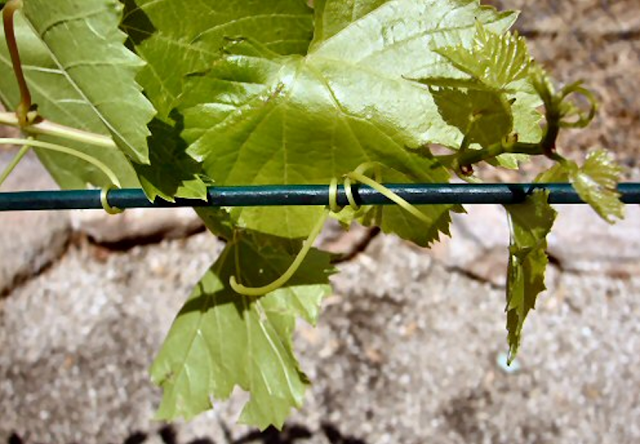 I auditioned a variety of FMQ patterns – spirals, feathers, leaves, loops – and decided that plain contours echoing the hillside were simple and effective and did not compete with the furrow fabrics themselves. 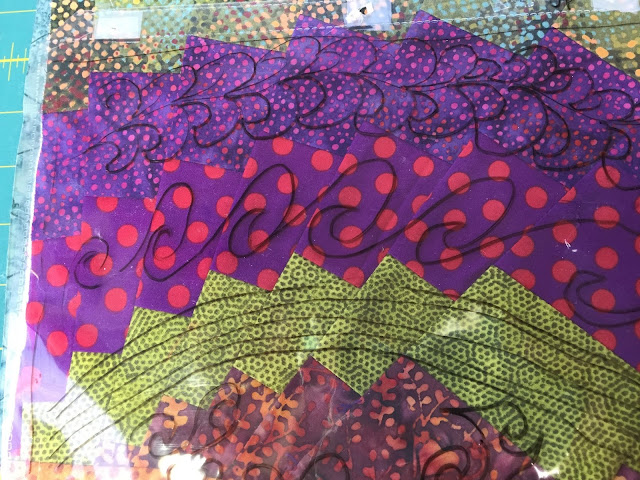 Next was the decision on the spacing of the smooth curves. I drew them at two distances apart on clear sheet covers and decided which spacing I preferred. I would use an echo foot to keep my lines uniform and parallel. 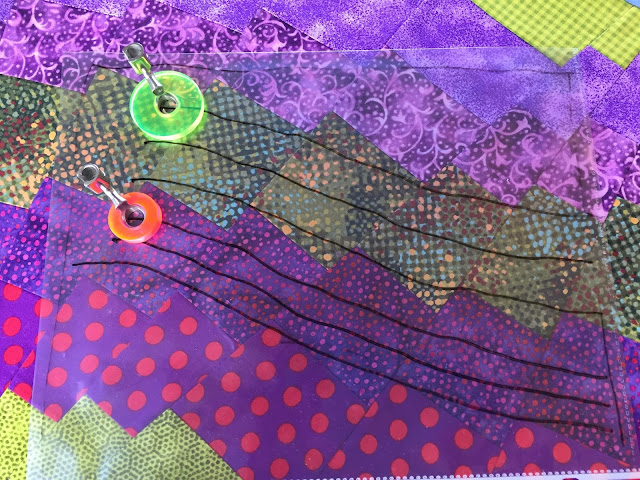 I went with the wider spacing. The scale seemed correct and there would be fewer distracting stitching lines. 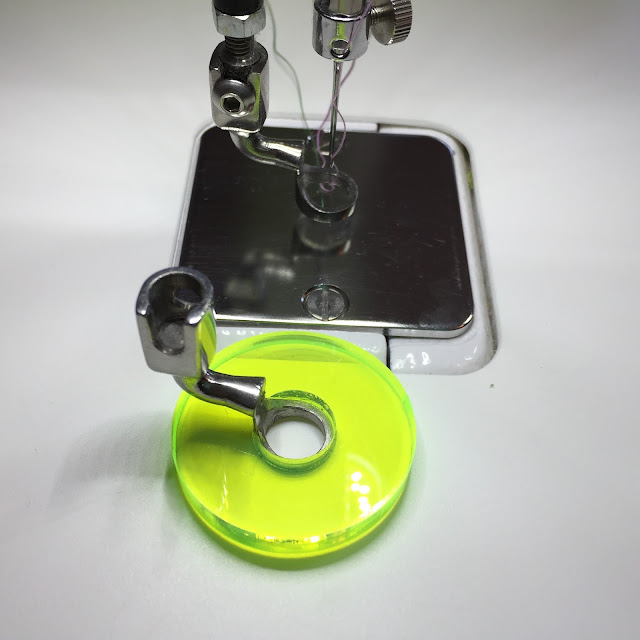 I opted for a purple-toned variegated thread to add a bit of interest. I reasoned that a solid thread would show up well on some fabrics and be hidden on others, but with a variegated thread, the light or the dark would peek out at one point or another on all fabrics. 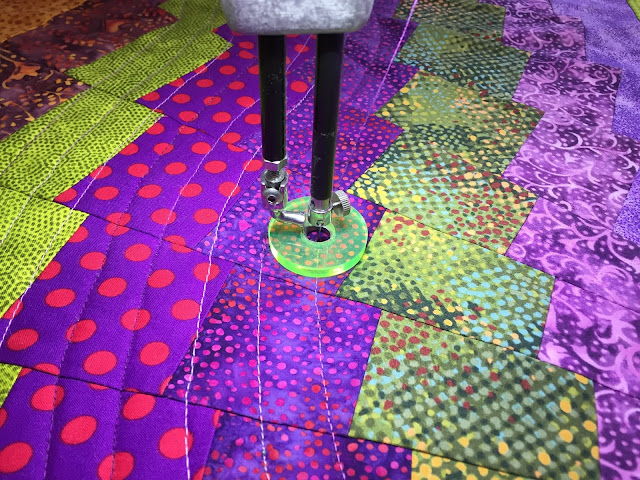 I did deviate from the gentle contour plan for the lower left corner where I thought pebbling would imitate the alluvial soil that grapes thrive in. I had to decide on a pebble size and drew several options. I wanted to have in my mind a target pebble size so I picked the size of the red circles on the polka dot fabric. 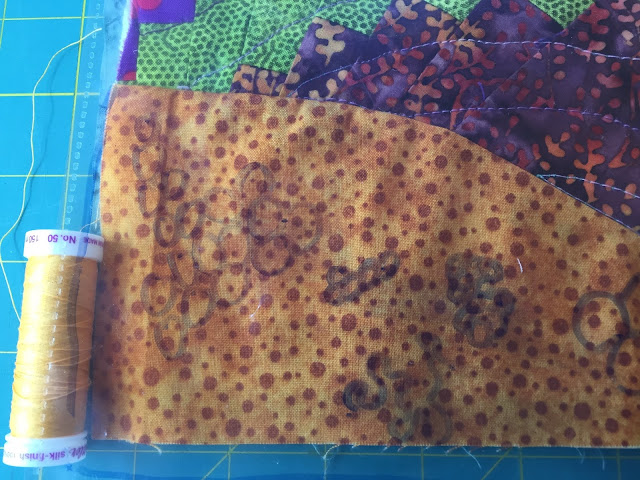 It turns out they are the same size as the inner diameter on my standard hopper foot so I would have a reference nearby as I stitched. Deciding on an FMQ pattern depends as much on what would look good, as on what my skill level allows me to quilt reasonable well. Having a size reference nearby would help me with my pebbling. 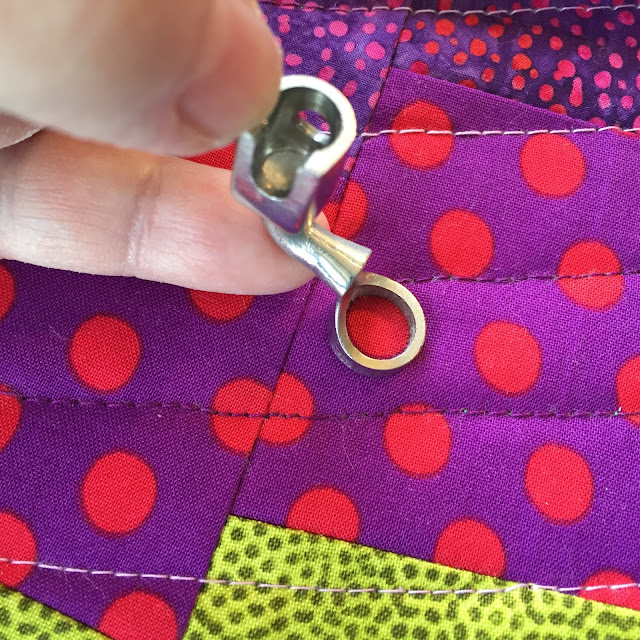 The pebbled quilting looked like this. This is not as perfect as I would like but the circles are getting rounder and the stitch length is growing more consistent. Progress. 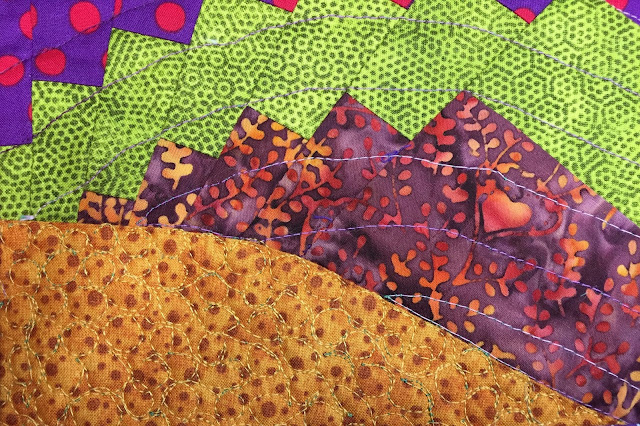 In the upper right snippet of sky I planned to some wavy lines like air currents and allowed myself a few swirls to remind me of gently wafting breezes. 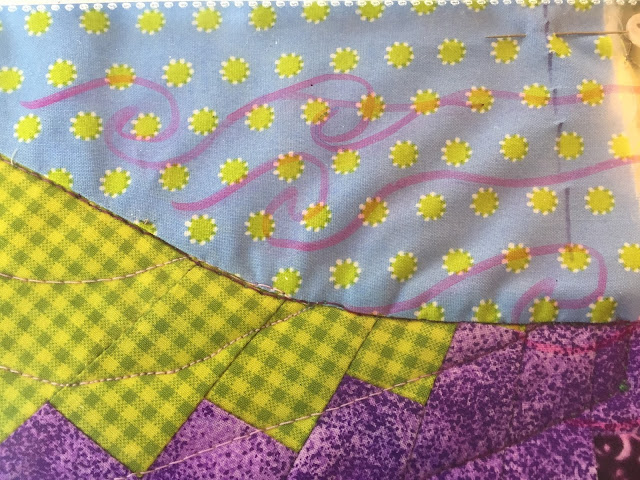 Once trimmed, I realized there would be less room for swirls than I anticipated but I did sneak in a couple by snugging them up to the hillside. But that is where eddy currents would occur anyway. 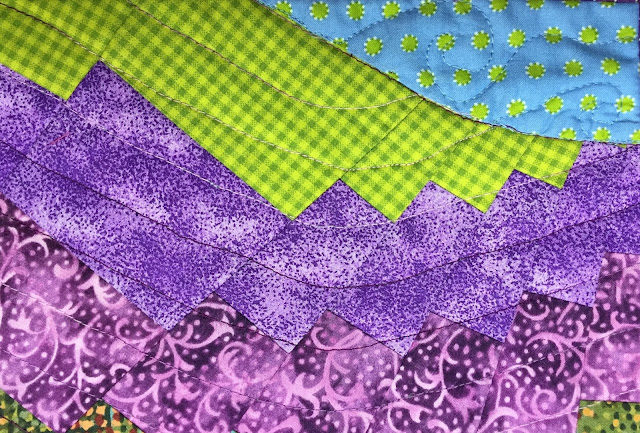 Quilting completed, I built up my nerve and slashed 1" to 2" off each perimeter edge so the piece in landscape format measured the prerequisite 16"x20". Next was my binding choice, where I had to make up my mind if I wanted the binding to pop or blend in. But blend in how? With the purples? With the greens? I kept an open mind as I surveyed my stash and, for some inexplicable reason, a peculiar yellow irregularly shaped dot appealed. No matter how many others I auditioned I was strangely drawn to this one. I rationalized that it picked up the gold splotches in the pixellated fabric. In my mind, the closest contender to the yellow was this vibrant plum plaid but I was afraid it was so geometrically rigid, that any straying off grain would compromise the tidy look of the binding. 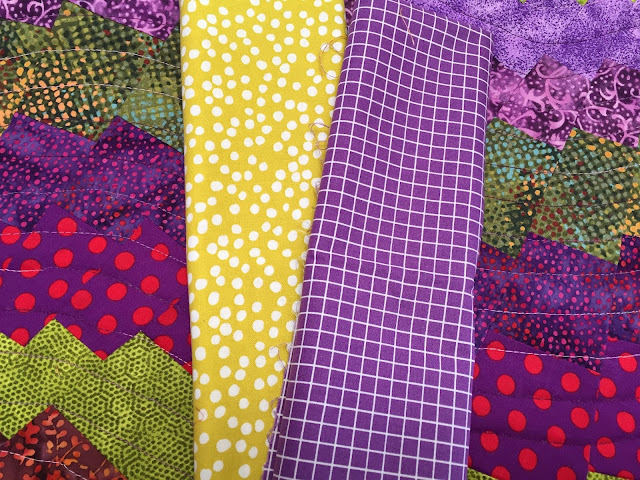 I thought if I kept the binding narrow so it would be an accent, not a distraction, I could be bold and take a chance on the funky off-yellow. Then I laid the quilted piece on the two choices and compared the funky yellow spots side by side with the plum grid. Even though narrow, the yellow was more jarring than amusing. I went with the plum. I also convinced myself it represented the fence line surrounding a vineyard. Yes, I chickened out. The plum was safer. But I had to admit it also looked better. I would find another use for that funky yellow inverse egg yoke fabric that so tickled me.

If you have stuck with reading along this far, the next photo is a somewhat anti-climactic reveal. For completeness however, here is the bound, completed, wall hanging, to be submitted for a Colors of the Vineyard challenge. 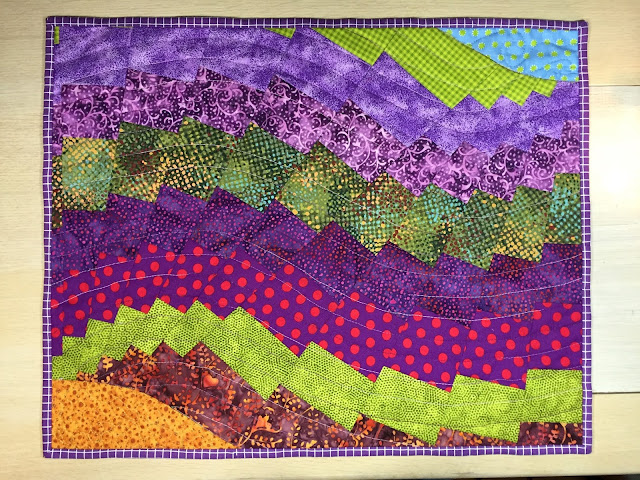 I added two labels on the back, one for the title, Vineyard Furrows, and one with my name and the date. The date is 2017 because that is the year of my guild's quilt show where, in April, I will submit it as a challenge piece under the theme Colors of the Vineyard. Despite the label to the contrary, I am counting it as a 2016 completion, my last one this year. 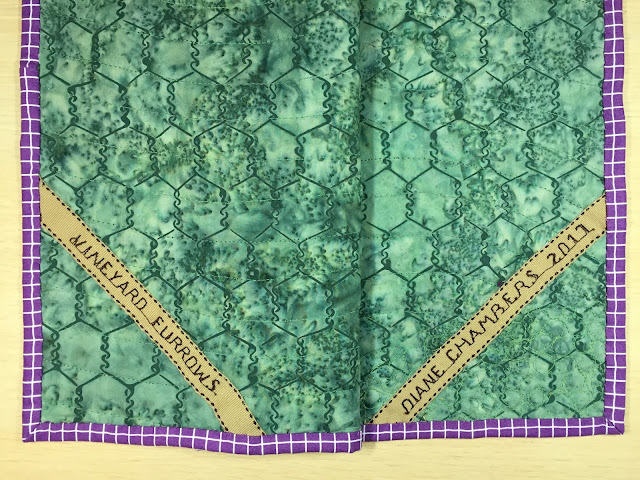 What puzzles me now is whatever will I do with these leftovers? Those two spiral ends must be good for something...Any ideas? What do they bring to mind for you?

This half makes me think of Alice's Adventures In Wonderland as she spirals down, down, Down the Rabbit Hole. 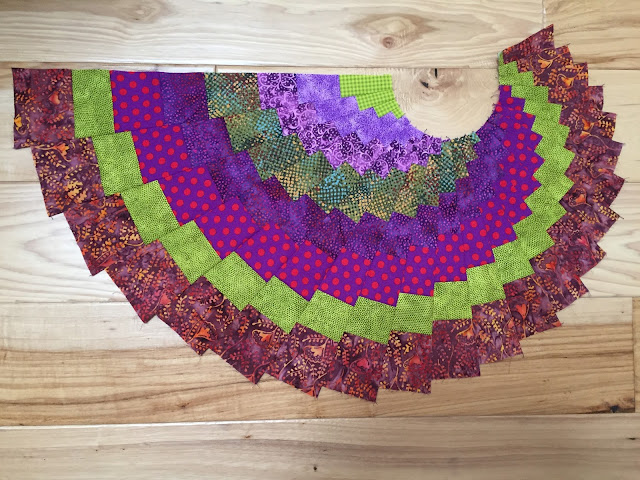 This half makes me think of Kermit the Frog singing The Rainbow Connection. 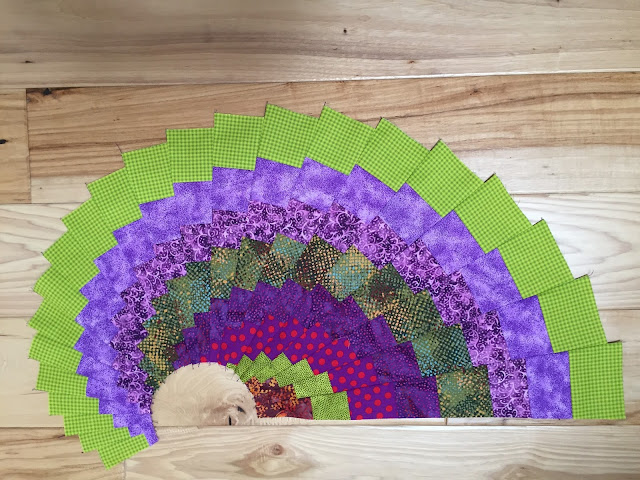 Technical quilting question to start out statistics for the new year – do these two spiral orphans count as UFOs or as scraps? Happy New Year 2017!

Update: I am linking up to Let's Bee Social #158 since previous visitors to the first post on this project expressed an interest in seeing the results.
Posted by DianeLoves2Quilt at 8:23 PM