At our last monthly meeting Saturday, July 14th, my local guild, Amador Valley Quilters held a men's panel comprised of four speakers who were husbands of guild members. Each speaker was to bring 3-5 quilts to discuss. My husband Frank was one of the speakers. This blog post is about his perspective.

The panel of men were vocal, jovial, entertaining, and surprisingly varied in their selections from among their wives' quilts. The only overlap was that both my husband and the leftmost gentleman brought train quilts made especially for them by their wives. My husband is the fourth from the left, sitting in front of the mainly green quilt. 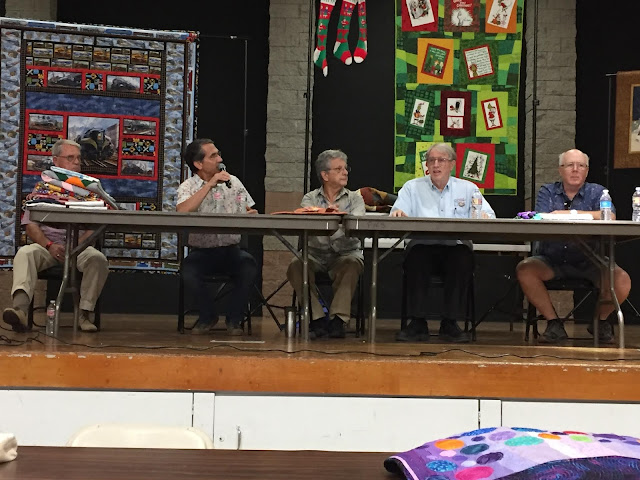 I found it interesting what my husband selected to bring. First off he chose three vintage Christmas stockings: his, mine, and our son Alex's. True, not a quilt, but still symbolic of handiwork of mine that was very special to him. The original stocking that started it all had been made for him as a child by his aunt who subsequently made one for me upon our marriage and one for each of our three kids upon their birth. Frank found the pattern on the internet and I have since knitted six more of these: one for a son-in-law, one for a daughter-in-law, three for three granddaughters, and one for a grandson. They have been disbursed to their respective families and I am about to knit a seventh for a new grandson just born in April. The three on the topmost right of the stair rail are what Frank brought to display and talk about. Links to the four stockings for my grandchildren are in my blog posts for Autumn's (12/10/14) Vivian's (12/17/14), Isaiah's(12/28/15), and Lillian's (11/29/16). Tradition is something my husband obviously values. 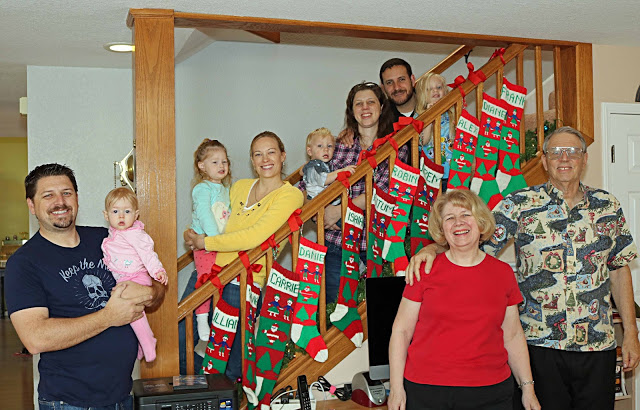 In keeping with the Christmas theme, Frank then spoke of the Grinch quilt, a favorite of his because it is based on the book he loves, How the Grinch Stole Christmas. He started his presentation of this quilt by reciting a quote from the book. The complete text can be found at http://web.mit.edu/tere/www/text/grinch.txt.


It started in low. Then it started to grow.
But the sound wasn't sad! Why, this sound sounded merry!
It couldn't be so! But it WAS merry! VERY! 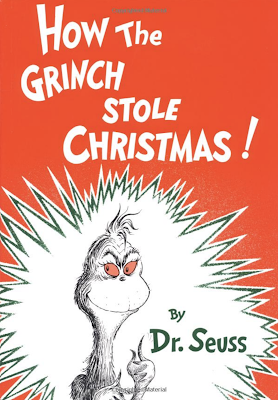 This book was a favorite of his as a child – and as an adult, too – so the subject matter appealed. He also liked all the crooked angles I put in it, in keeping with the flavor of Dr. Seuss type illustrations. Another selling feature for this quilt is that we use it. My husband likes quilts that are not hands off because they were so much work to make. Frank did not discuss the making of this quilt, only the reasons for his liking it. Details of setting the skewed panel images are available in posts for 11/26/11 (blocks 1-5) and 11/26/11 (blocks 6-10), as are my misadventures in quilting it in my post for 7/2/14. 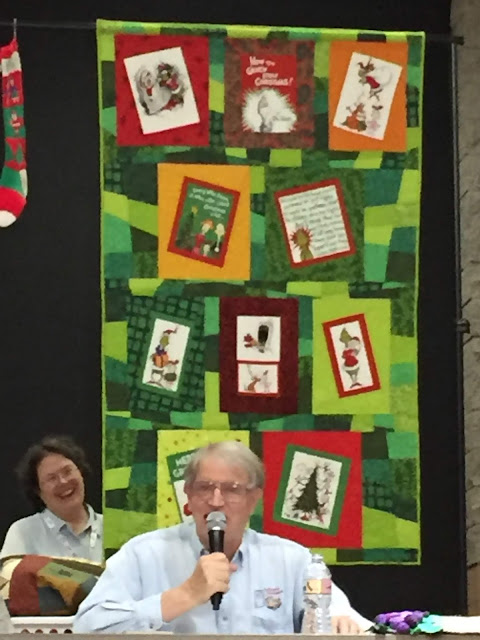 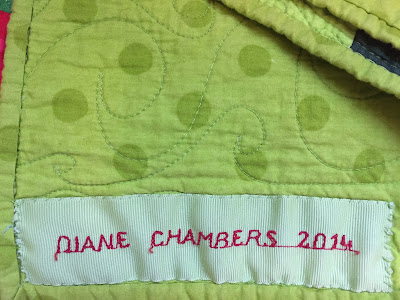 Here is the Grinch quilt covering four grandchildren Christmas of 2016. 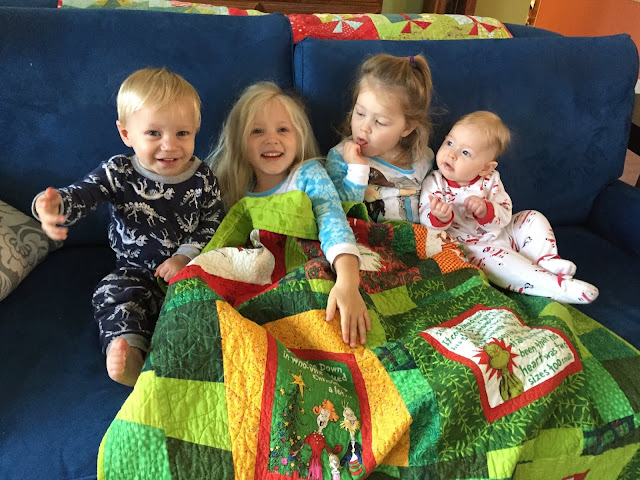 Speaking of Christmas and quilt usage, next up for discussion was his train quilt, made for his 60th birthday. On November 30th, 2016 Frank fell from a ladder hanging up master bedroom curtains I'd sewn, shattering his hip joint and needing an emergency hip replacement. Frank used his train quilt all the time in his hospital bed at home after the surgery and during recuperation. The train quilt had turned out much longer and narrower than I actually wanted it to. Frank does not reveal the odd proportions nor seemed to be aware of this anomaly in his talk. Fortuitously, that extra length was perfect for tucking under the mattress of his hospital bed staged in the living room the Christmas of 2016. 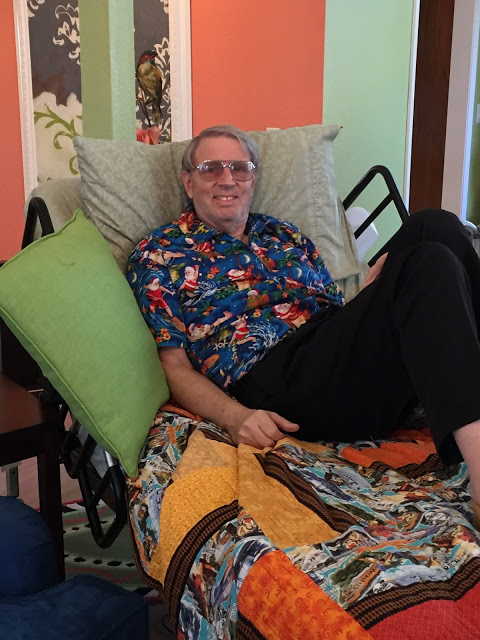 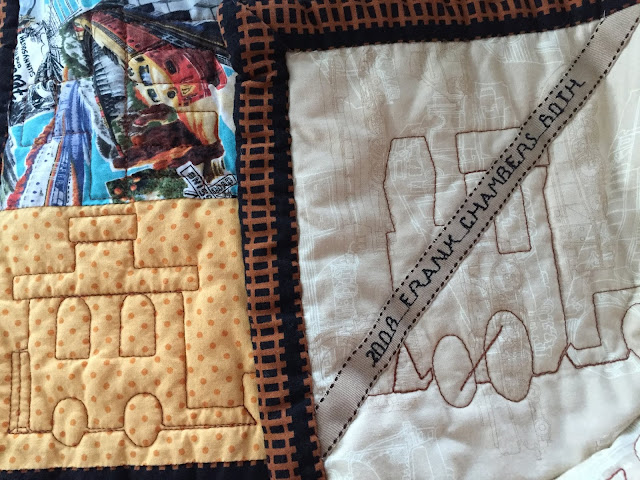 More important to him was that I appropriately captured the colors of Refrigerator Railway Cars. He brought the book to prove it. 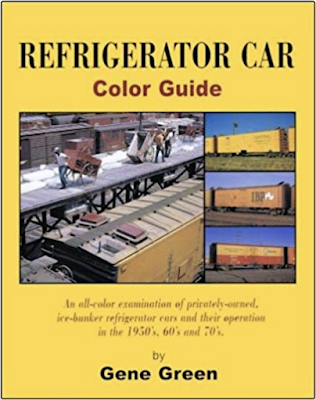 A closeup of the quilt is in the following photo showing the near to authentic mellow yellows and subdued oranges of the box cars. Note that the divider strips are black and brown train tracks. Frank noted that, too. 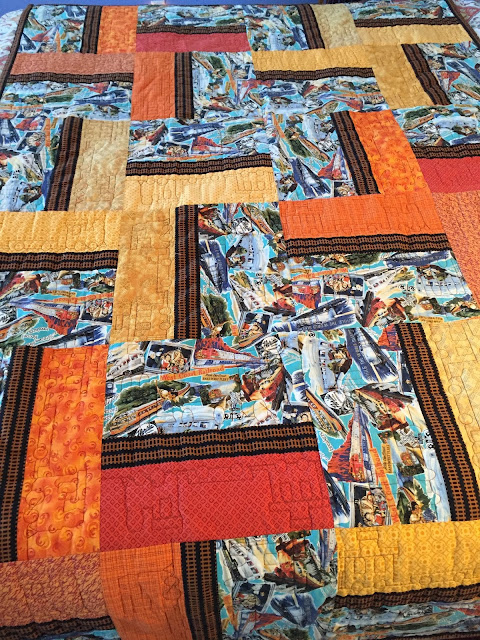 Frank's next quilt topic was the Thimbleberries quilt that lives on the king size bed in our guest room. Note again this is a quilt we use. It also has a story behind it that he loves to tell – since it features his heroics. 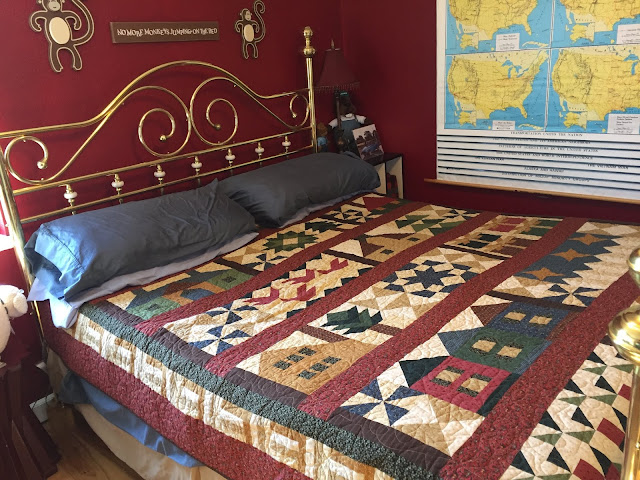 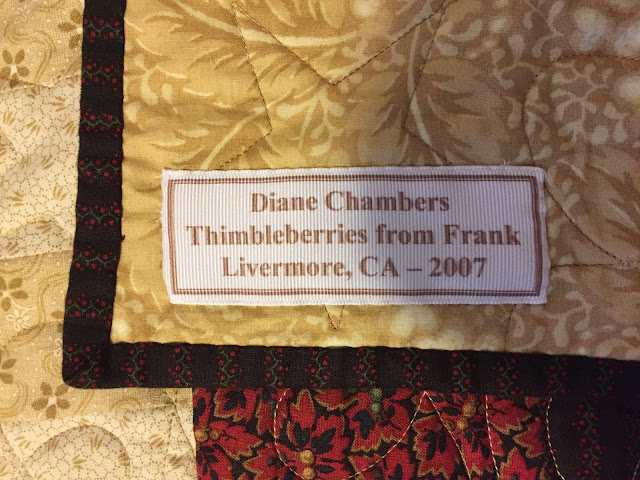 I initially saw this quilt kit online many years ago. I was able to buy the pattern books for it – all four volumes of Thimbleberries Hometown Christmas – but the kits were all sold out. I was disappointed because I thought the muted colorway of fabrics, already gathered together in kit form would stretch me beyond my usual palette of brights. 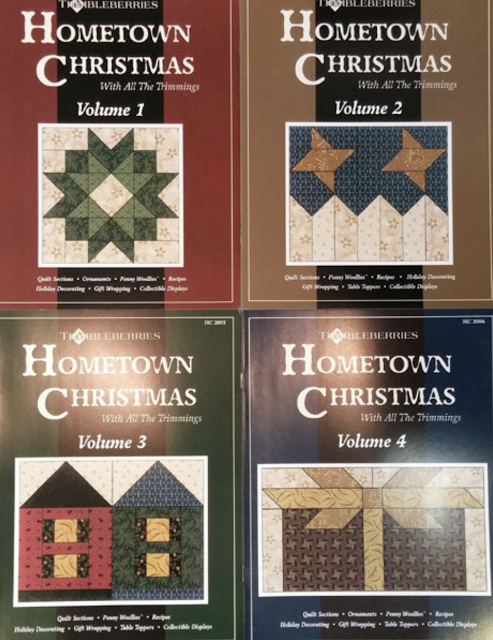 My husband, knowing me, realized I would take forever to decide on the fabrics, buy those outside my comfort color zone, and then analyze where to place them. Having no online success at finding the kit, unbeknownst to me, Frank proceeded to phone quilt shops up and down the west coast, trying to find one that still had the kit. He found a shop in Oregon going out of business that still had one of the kits to sell. He bought it and surprised me with it. I thoroughly enjoyed taking my time and sewing it up. I intentionally left the holly leaves off the tri-tone triple bar gold border, partially because I am not fond of appliqué but more so because after having invested that much work in the quilt, I wanted it to be available for use year round and not just at the holidays. I entered the Thimbleberries quilt at our local county fair and won a ribbon. 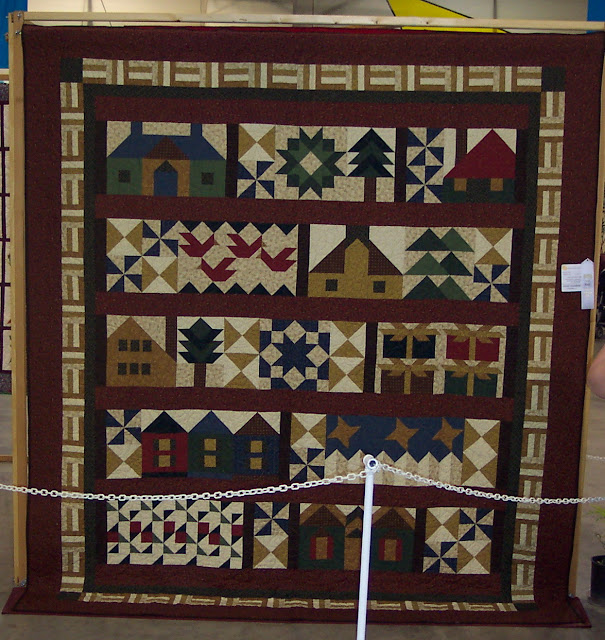 The final quilt my husband selected to share is nicknamed by us The Sanity Quilt. It too has a background story. In the winter of 2007 our special needs son who has a heart condition caught the flu. He became so dehydrated that the cardiac medications in his bloodstream rose to toxic levels and he had to be admitted to the intensive care unit of our hospital. He survived and is fine now but obviously this was a stressful period for several days for us. When he was released and sent to recuperate at home in the weeks thereafter, we sought out short trips that were distracting and not too taxing so we could get out of the house. 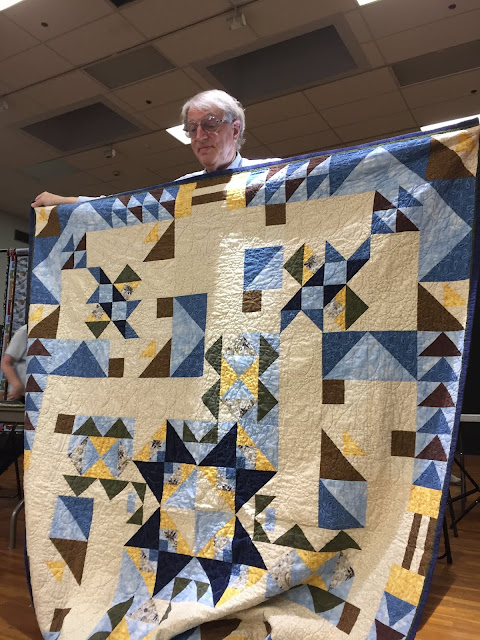 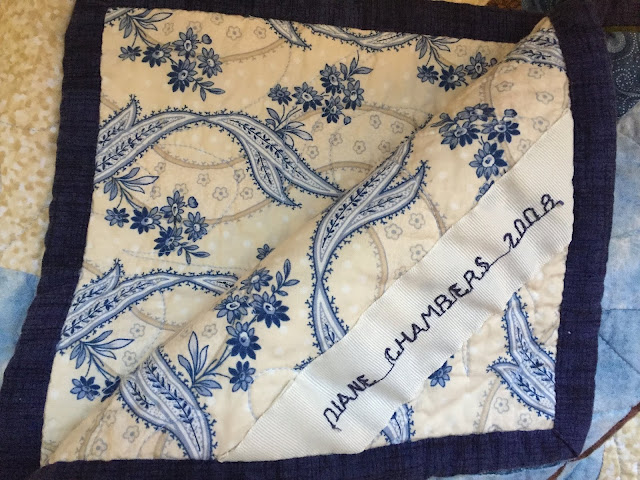 These trips were to San Francisco Bay Area Jo-Ann's fabric stores within a 50 or so mile radius to collect outdated quilt blocks from their 2006 Collection titled Rhythm & Blues, normally sold at one per month for $7 or $8. My husband and I, with Alex along for the ride, scoured their clearance bins gathering these packages for $1. I even had my daughter in Oklahoma and my sister in North Carolina find some of these for us. Sewing them up as my son regained his strength and health was a soothing form of maintaining our sanity. The quilt looks nothing like the intended assembly. My husband's focus was the daunting background story that helped us through to a happy outcome. (For those who want the quilting details, they are in my blog post for 6/20/12, where I compared this quilt to the original design and show how I repurposed the blocks.) In the next photo Frank is telling the story and explaining why we dubbed it The Sanity Quilt. 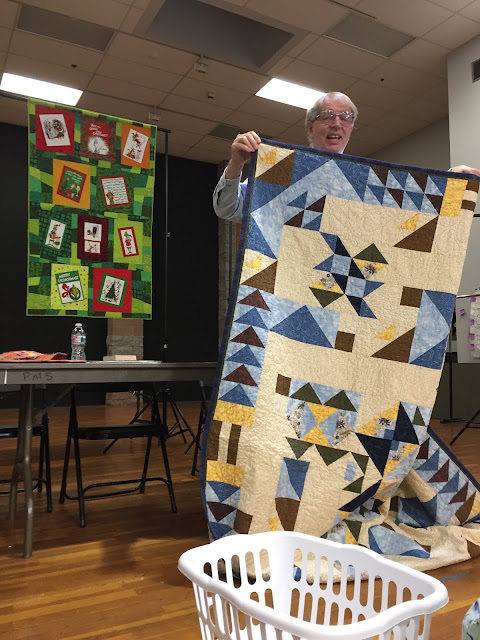 Here Frank is down on his hands and knees – despite his limited mobility with his replaced hip  – spreading out the quilt on the stage for members to look at afterward. Quilt husband extraordinaire! 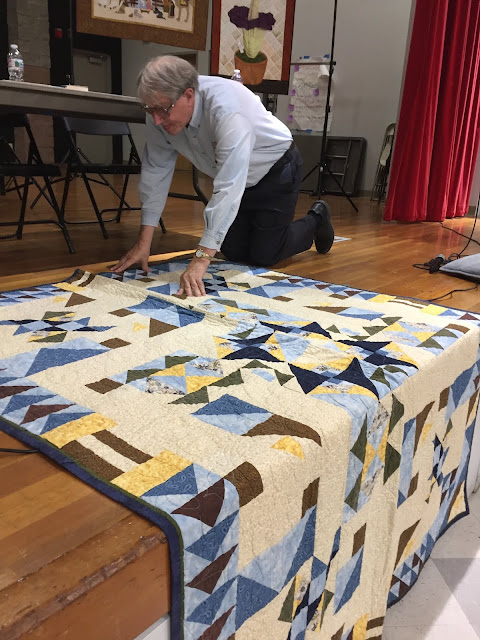 Frank also shared some book knowledge suggesting that women should get A Husband's Guide to Quilt Appreciation for their husbands' educations. He divulged his technique for appearing knowledgable, learned from the book. When asked his opinion on a quilt he will pause, ponder, and thoughtfully offer the query, "Do you think this might look better on point?" 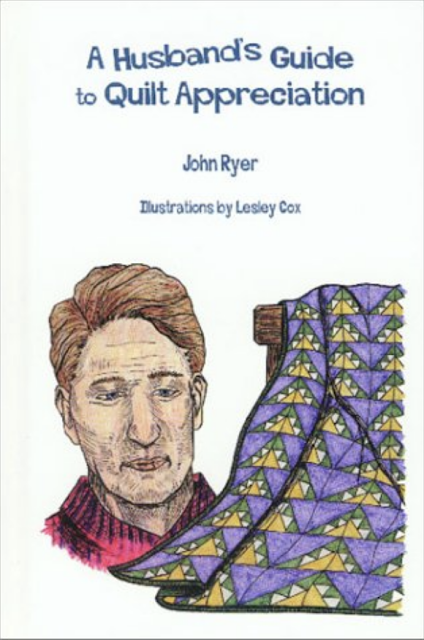 Frank showed off the shirt he wears to all quilting functions, be they shows, or shop hops, or auctions, etc. The shirt bears the embroidered image of a skeleton sitting on a bench outside a quilt shop with the description inscribed above Quilter's Husband. The neck is worn thin on the collar of this shirt. Frank points out that he also has train shirts that he wears to all model train functions and they are not worn. Draw your own conclusions. He is proud to admit he is the CEO of quilt shows, the acronym standing for "Carries Everything Out". 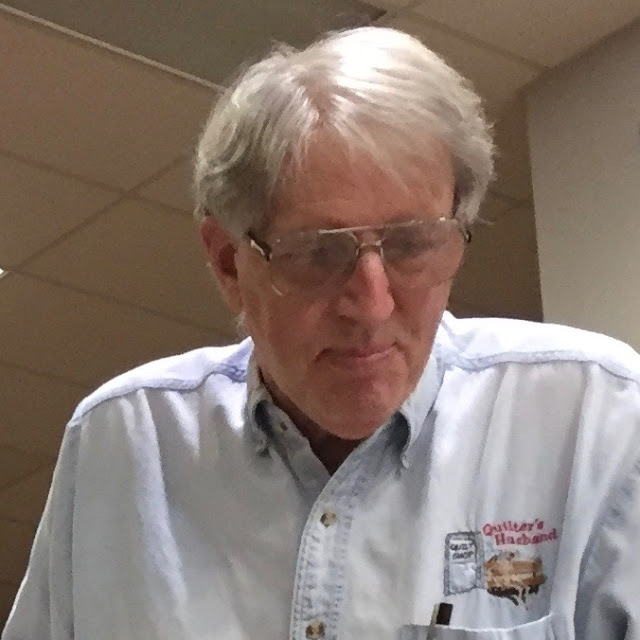 Frank also gave an advertisement for the Earlene Fowler series of quilt themed mysteries. He told how he had read them all. I have read none. He advised other husbands to buy them at quilt shows and read them while their wives are shopping. 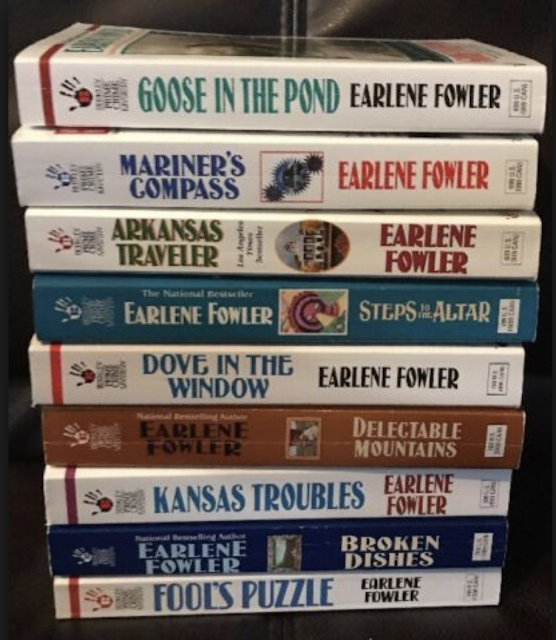 I am pleased, proud, and grateful that Frank is so supportive of my hobby. In my own defense, however, I am also very accepting of the 1000+ train cars he has in our his garage. Not all of them are shown in the following photo. I will close this post with a quote from Winston Churchill:

To be really happy and really safe, one ought to have at least two or three hobbies, and they must all be real. 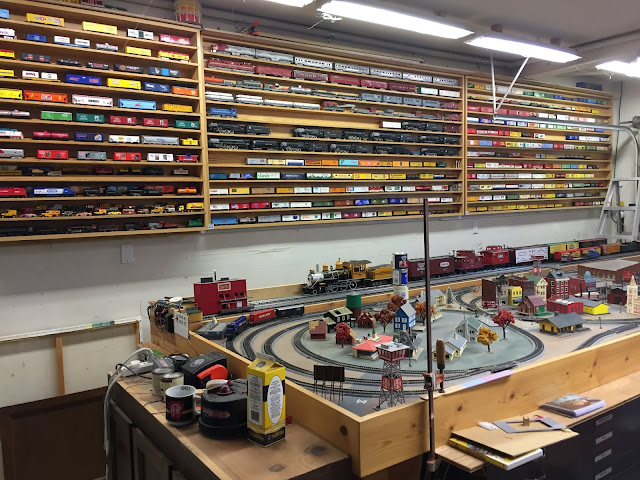 Another hobby? Linking up with Let's Bee Social #235.
Posted by DianeLoves2Quilt at 4:13 PM